What can I say about me? Probably nothing that hasn’t been said before but it’s a little easier for others to talk about me than it is for me. But what the hell; I’ll give it a shot. And hey, it’s my blog. If someone doesn’t like it, the exit is stage right.

Eagles may sore, but weasels don’t get sucked into jet engines. – Linda Hall

I’m a happily married man who lives with his husband in San Francisco, CA (yeah, could I be anymore of a gay?). Mikey and I have been married for three years as of this writing and together for five. I was there at San Francisco City Hall in 2004 when Gavin Newsom catapulted the gay rights movement into the 21st century and it was with joy and love in my heart that I said ‘I do’ in the same spot seven years later. It was a long, hard battle but we won. We continue to fight the war but hearts and minds are changing with every story we tell.

In the face of love, everyone is equal. Let everyone have the freedom to love and to pursue their happiness. I am Tsai Ing-wen and I support marriage equality. – Tsai Ing-wen

I work in Development Operations for a prominent tech company here in the Bay Area, a job that I’ve been doing for over twenty years now. To that end, I’m one of the truly lucky people who gets to work at a job that I love and that pays my bills. I think that’s rare these days and not a day goes by that I’m not thankful to the Universe for allowing me the opportunities I’ve had. And while I do get a bit tired of time sheets, status reports, scrums and Jira, in the end I do so love software development. It’s challenging and educational and I can do it in my underwear.

Time is the fire in which we burn. – Unknown

As you might have gathered just now by that Universe reference, I’m not a religious person. In fact, I’m a very militant atheist who understands that gods are a creation of man, the bible is just a words on pieces of paper and that there was no and never will be a messiah. I do, however, believe that Karma will kick you right in the ass if you’re not a good person and sometimes even if you are. Life is the demon we cling to and sometimes, it clings right back with a set of talons that tears us to shreds.

Do not dwell in the past, do not dream of the future, concentrate the mind on the present moment. – Buddha

I’m also a quasi-retired activist who uses his position of privilege to fight for those whose voices cannot or won’t be heard by the majority. I believe in equality and freedom and doing what’s right even when the majority says it’s wrong. #BlackLivesMatter. #MeToo. #OccupyWallstreet. #TransLivesMatter. #GayPride. #LeatherPride. #ACLU. #PlannedParenthood. #Suffragette. #Feminist.

Our freedom was not won a cetnury ago – it is not won today – but some small part of it is in our hands and we are no longer marching by ones and twos but in legions of thousands convinced now that it cannot be denied by any human force. – Dr. Martin Luther King, Jr.

I have no pets although I’m definitely leaning towards a new fur baby (I’ve been off the pet market since my cat died six years ago). I do have a furbie. Does that count?

Until one has loved an animal a part of one’s soul remains unawakened. – Anatole France

#MoscowMitch has laid down some crazy ass rules in his resolution for a “trial”- no evidence that the House developed is being allowed. The two days of House managers making a case (?) begins at 1pm and then goes past midnight. So: no documents, no evidence, no NOTHING.

The draft #USMCA originally put forward by President Trump failed to protect America’s workers, had huge giveaways to Big Pharma & fell far short on the environment. The USMCA I signed this morning has been transformed by Democrats’ leadership for hard-working Americans. 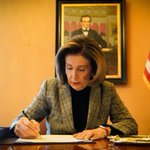 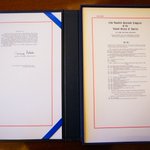 If McConnell acts as threatened, Pelosi should depose Parnas in the house and then issue a further article of impeachment. Parnas could be then be heard publicly during the current trial.

Almost guaranteed if McConnell gets his sham trial the media will spend far more time examining how the Democrats "overreached" than the shamelessness of Mitch's corruption.

Wonder what Bill Barr has done to bury that investigation into Trump's inaugural committee and the missing millions that came almost exclusively from foreign operatives.

Dershowitz complains that the Articles of Impeachment are deficient because they don’t allege Trump committed crimes. Article II is Obstruction of Congress, a CRIME, 18 US Code 1505. In fact, Roger Stone was CONVICTED of that exact crime by failing to produce docs about Wikileaks