After 15 incredible years, NASA has bid farewell to the Mars rover Opportunity. And I can’t stop crying.

“‘My battery is low and it’s getting dark’ is so hauntingly human, so crushingly lonely. I can’t articulate the deep, profound ache that sentence evokes. It’s acceptance and defeat and terror and sadness all at once, all from one tiny machine we asked to explore the stars for us.”

Rest well, Robot. Your work there is done.

“At some point in our species’ future, a human will walk up to the Opportunity rover, clear the dust off her solar array, and wake her up. This probably won’t happen in my lifetime, but it will happen, and when it does, it will be incredible.”

It was 33 years ago today; I remember it so well. I had faked being sick so I could stay home and watch the shuttle launch. It was carrying my hopes and dreams as one Christa McAuliffe was strapped into the orbiter, the first civilian to ever grace NASA’s shuttle program and who would become the first ‘Teacher In Space’. For a brief moment in time, for 73 seconds, the world watched as Ms. McAuliffe made history.

As I watched, everything I’d ever believed or hoped for or dreamed of vanished in the blink of an eye. The tears started as I listened to the CBS commentator describe what we were seeing: NASA has confirmed a catastrophic failure of the orbiter launch system; the external fuel tank has exploded; the orbiter is destroyed; the fate of the crew is unknown.

But as the day moved on and the commentary continued and became more and more informed, my hope faded and eventually died. There was no sign of the orbiter; it had been completely destroyed and NASA eventually announced later that week that the crew was presumed dead. In a report later released by NASA, the indication was that three crew members actually did survive the initial explosion but the crew compartment, although over-engineered, had impacted the ocean surface at approximately 333 km/h with a deceleration at of well over 200g which is far beyond anything the crew could have survived.

My heart was broken. It took six months before my emotional state improved enough for me to even think about what had happened and even then, I would still break down into tears. Even today, after all these years, I still have a heavy heart. Time, of course, has softened the pain and anguish into a distant ache but at times I still feel like that little kid sitting in front of the television 33 years ago watching as his heroes died.

When I was a kid, I had this insane dream of being an astronaut. Now, I don’t share that with many people (they always laugh at me) but it’s true even though it was quite an impossible dream to have because my vision would never allow me to fly any aircraft let alone on the space shuttle. But when you’re a poor kid with very little to look forward to in life, that sort of stuff didn’t matter. And so I dreamed. I dreamed of what it would be like to be weightless in the silence of space. I dreamed of what it would be like to see the ice caps and the deserts all at once. I dreamed of what it would be like to be up there where the sky is no longer blue and stars are bright lights pinning up the black velvet of space’s sheer vastness. I dreamed as I followed Christa McAuliffe’s journey from New Hampshire high school teacher to payload specialist on board the space shuttle. And in 73 seconds those dreams died. Or at least it felt like that.

After a while, that feeling passed, though, and as the pain and heartache began to ebb, I began to look at things differently. I began to see that no matter how much seeing those men and women meet their fate hurt, I still wanted to be an astronaut. I still wanted to touch the sky and I realized that dreams don’t die, they just take hits, sometimes in very profound ways. I also came to realize that even in death Christa McAuliffe was still teaching and that I had learned a valuable lesson from her on January 28, 1986: Chase your dreams, no matter what. And while I’ve settled into the comfortable fact that I will never be an astronaut, sometimes I look up at the sky and I still dream of what it would be like.

Trump's defense is really a #ConfederacyOfDunces

Here's Ken Starr in 1998 explaining why it is impeachable for a president to refuse to testify, and block witnesses and documents 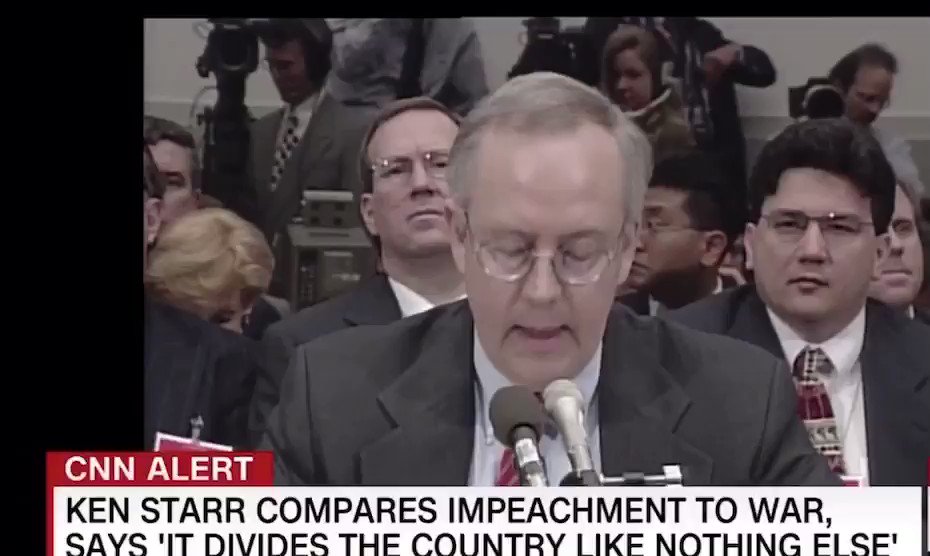 This may sound like a really dumb question, but what kind of United States president could be #Impeached other than a duly-elected one? #Trump #Sekulow

One of the most disingenuous assertions President Trump’s defense team makes is that this is all about policy differences. Using public office for personal gain is not just a policy difference; it’s an abuse of power.

Trump is in New Jersey tonight and is telling crowd he might play for the state. In recent Oval briefing, he asked Christie, the former governor, if he could win the state, per several people briefed. Christie said no.

That son of a bitch will always be in the news.

Trump is pretending he’s doing his job as president, DISTRACTING from his impeachment trial

@lizmoblubuckeye Yes.
That should be a no brainer.

Evacuees from Wuhan are on a plane to the United States. Should they be quarantined? - CNN 😷😳 https://www.cnn.com/2020/01/28/health/us-evacuees-airplane-coronavirus-quarantine/index.html